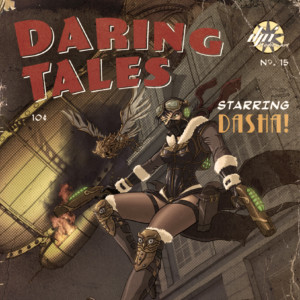 Can you believe it was 85 years ago that Dasha made her first comic book appearance in Daring Tales #15? Prior to that our aviatrix with a taste for adventure was most famous for a series of radio drama’s in the early 1920’s.

Dasha’s original radio dramas never really found their audience, an idea ahead of it’s time? Years later however, with the soaring popularity of real life “Queen of the Air” Amelia Earhart, the world was ready for Dasha’s return.

Her appearance in Daring Tales #15 also marked the first appearance of her mechanical owl companion she nicknamed Fred, after her father. The owl was always intended to be a part of her adventures but the producers of the radio dramas just didn’t think the audience, “would get it”.

Dasha’s origin revolved around the death of her father who was a world famous archaeologist. Inheriting his taste for adventure and her mother’s genius intellect Dasha’s globe trotting adventures often featured a race against the criminal underworld to recover priceless artefacts and lost golden treasures.