I started DPI Studios with my long time friend Aaron (aka Embrio) whom I have now been collaborating with for over 20 years. We meet through a mutual friend Rob back in high school and started working together on our own comic book ideas. Some of those old ideas, like the seed mercenaries, have lasted and still show up in our artwork today.

Over the years DPI Studios has done artwork for the World of Warcraft TCG, White Wolf’s Exalted RPG, and Green Ronin Publishing. Our artwork has been included in Exotique and d’artiste Fashion Design artbooks through Ballistic Publishing and a gallery feature in Heavy Metal Magazine (issue #267). Our painting Make a Wish had the honor of being selected as the cover for the 2011 Calgary Expo artbook cover. In 2006 DnD Classic received the 1st place award at the Dragon-Con art show and Necromancer (shown right) won Best Color at the Westercon 58 art show. 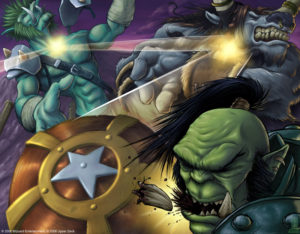 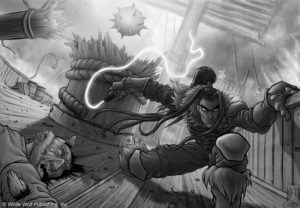 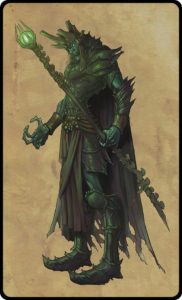 2015 marked the 10th anniversary of the Calgary Comic and Entertainment Expo and DPI Studios involvement with the show. Way back in 2006 we snuck in at the last minute; confirming a spot in artist alley the Thursday before the show. After a very late night printing session we had a successful show and the idea of selling our artwork directly to fans and collectors took hold.

Throughout the years people have often asked what’s the story behind our characters. Now we are finally answering some of those questions with our web comic series. First off is Sourpuss, one of our original comic ideas from our youth. Next is Daring Tales, a collection of short stories to give life to some of our most popular steampunk characters. Who knows what will come next 😉

We are extremely grateful to all our fans support over the years and we hope you’ll stick around to see where we go next.