I’ve decided it’s time for DPI Studios, as you’ve known it, to end.

12 years ago Aaron (Embrio) and I exhibited at the first Calgary Expo and we were blown away by the response. Not only did people like our artwork, they were willing to pay for it. The dream come true. The following years were a rollercoaster. We made many good friends from doing conventions in Canada and the US. Worked for big name companies and had our personal work published in artbooks and Heavy Metal magazine. The friends and memories I’ve made through DPI Studios have been some of the best in my life.

With Aaron’s departure I continued on, working with other artists and on my own work, but it never felt the same.

I came to realize after the 2018 Calgary Expo that I’ve put a lot of pressure on myself by trying to live up to my expectations of what DPI Studios was and should be. In reality, it was a made-up name for two buddies to sell their artwork as. In the beginning our main goal was to make the art we wanted to make and to have fun while the ride lasted. Along the way, the ride has become less and less fun. Each new attempt to rekindle the fun (AR, Web/Motion Comics) was a short lived distraction from the real problem.

Now, in an effort to shed 12 years worth of DPI Studios baggage I’m “burning it to the ground”, in a sense. This coming 2018 Edmonton Expo will be the last show for DPI Studios and it will involve a fire ­sale to clear out old inventory and pay off some debt. The DPI Studios website and online store will remain as it is for the foreseeable future. I’m starting the fire sale early online with some of the large canvas prints that are taking up space in my living room. Details on that can be found here.

As for my future? Well, I’m not so sure on that topic. I need to rediscover my passion. If that leads me back to producing art to sell at shows it will be under my own name. I’ll most likely continue with the work I’ve been doing with video and motion graphics production. Whatever the future holds I’ll be making occasional social media posts to update people on my progress.

Of course, I cannot finish this without a gigantic thank you to all of you who ever purchased our artwork over the years. As an artist the hardest part isn’t the creating, it’s the showing. Knowing that artwork I made is hanging in the homes of so many wonderful people is a very special warm feeling. Thank you all very much.

So, if you’ve been a reader of Sourpuss you’ll have noticed a massive delay between pages. Basically what happened is Embrio has moved onto another project and I took too long to see it coming and do something about it. Embrio and I have had a complicated working relationship these last ten plus years (to put it mildly). Sourpuss was a comic idea we fist came up with before there was ever a DPI Studios and I was excited to be working with him again on it. The fact that we got 13 pages done is a bit of a miracle if you’re familiar with our track record.

I’ve now finished page 14 based on the rough thumbnail Embrio did of it before he moved on. My inking skills are a little rusty. That’s why that page looks a little different.

I’ve been conducting an open submissions call looking for a new artist for Sourpuss and as I type this I have an awesome artist working on a test page. If everything goes smoothly we’ll be back on a regular schedule right away. Thanks for sticking with us.

I have altered some of the Sourpuss motion comic pages. The pages in question were the panel to panel animated pages. Previously those pages would take a long time to fully animate and if you were attempting to go back and re-read pages it was painfully slow and cumbersome. Now with the change those pages are fully visible to begin with and the animations that take place on the pages happen much quicker. I hope you prefer this format and if you have any issues leave a comment or send me an email. Thanks.

Have you heard of Patreon? You’ve probably heard of Kickstarter. Well, Patreon is a crowdfunding platform, but in a different way than Kickstarter. Kickstarter and IndieGoGo are mostly about one time projects (like a game or *cough* artbook). Patreon is about helping to support artists over the long term.

Instead of a one time large payment for a project, Patreon is about getting smaller regular payments to help fund an artist every month. Just like Kickstarter there are rewards for your patronage, but usually they are digital rewards like exclusive content or behind the scenes access.

We went into doing webcomics knowing full well it’s a long road before they ever start paying off in any financial way. Advertising used to be the main way of supporting oneself doing webcomics, but now many are turning to Patreon. We’ve started thinking about creating a DPI Studios Patreon page and we’d love to get a little feedback about reward ideas. We’d actually love any feedback really, you’re a very quiet bunch.

So far, we’ve brainstormed the usual rewards. For a couple bucks a month you’d get access to work in progress shots and character sheets (possibly getting the comic a day early). Then higher tiers would get access to a Patreon supporter forum or Slack channel, live streaming work sessions. And what I think is maybe the coolest idea for reward tiers $10 and up, a half back coupon to the DPI Studios store. For $10 you’d get access to everything else, but also every month you’d get a $5 coupon you could use online or when you see us at a con.

Let us know what you think about those ideas or if you have any to share leave a comment.

It’s only 1 week before the Calgary Expo! This year will be our 12 year in a row at the Expo. Not only are we kicking off our new web comic series at the show, we also have some new AR enabled artwork to show off. We’ve even enhanced another one of our older pictures you may already own. So come see what’s new at booth #1022. 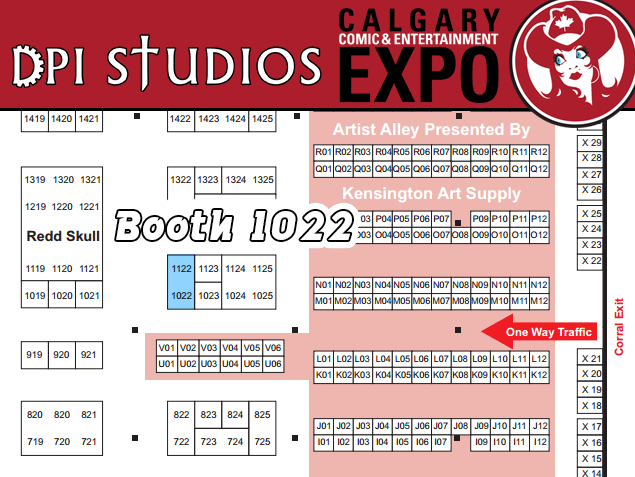